Alfred Hitchcock only made three costume pictures in his entire career, it wasn't a genre he was entirely comfortable with, "I'm always thinking 'where do they go to the bathroom?'" Much maligned (even by the master himself), a fresh look proves there's a lot to like about this moody tale of early 19th Century coastal scalawags. Adapted from Daphne DuMaurier's atmospheric but somewhat plodding bestseller, the plot was smartly re-structured to align with one of the director's laws of suspense: give the audience more information than the characters. We learn quickly who the bad guy is, when will the heroine? Therein lies the tension. A winsome Maureen O'Hara, just a teenager and making her solid film debut, is a young English lass who comes to live with her long lost aunt and uncle in the title establishment, a place of nefarious reputation. See, Uncle, a craggy Leslie Banks, is the leader of a band of "wreckers", land pirates who lure unsuspecting ships to their doom on the treacherous Cornish rocks and then scoop up the booty killing all aboard. Headstrong O'Hara will have none of it, and she enlists the nearby kindly squire, Charles Laughton, to help undo the deadly dealings. The whole affair is filled with little Hitchcockian touches, you can't tamp down pure talent, but the most fascinating realization when watching is that the entire picture was shot on studio sets. Shipwrecks. Crashing waves. Rocky coasts. Horse drawn carriages traipsing up and down the desolate English moors. All created in a controlled environment and it looks superb. Unbelievable  film craftsmanship that deserves a viewing. 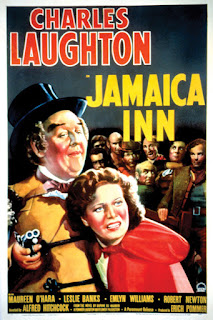 Posted by roncastillonyc@yahoo.com at 12:27 PM