Film noir can be hardbitten and cynical or lushly romantic, but there's one rule characters in the genre must live by: the deterministic, inexorable power of Fate. In this haunting effort, an streamlined updating of Theodor Dreiser's dense novel "An American Tragedy", Montgomery Clift is an eager but poor young man who travels cross country to work in his rich uncle's clothing factory. He can see before him all the possibility of what wealth can bring, clothes, cars, big homes, and most importantly, a girl. And what a girl this is. Elizabeth Taylor in her first adult role ("Before that, all my leading men were either dogs or horses."). Her Angela Vickers is the embodiment of everything post WWII American men wanted and what women wanted to be. It wasn't an easy role, she's aspirational but not haughty, flirty but not off-putting, sexual but still innocent. No wonder Clift falls hard for her. But of course, there's a problem: he's gotten his previous girlfriend pregnant, a drab and dowdy scene-stealing Shelley Winters. If only this Debbie Downer were out of the way, and that's when things turn sinister. Director George Stevens alternates between the two worlds tearing at Clift, the working class dead-end life with Winters, and the glamorous enviable world of Taylor, with languorous overlapping dissolves. And effective way of juxtaposing the dichotomies. And was there ever a more attractive screen pairing than Taylor and Clift? Their famous kissing close-ups are rapturously beautiful. And as added eye candy you get Edith Head's much-copied ball gown, the one with a spray of white lilacs showcasing Taylor's bosom. One look at her in that get-up and he's a goner for sure. Just like us the audience. 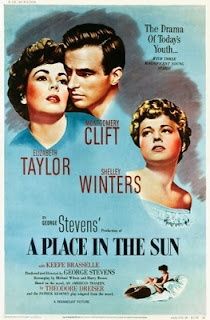 Posted by roncastillonyc@yahoo.com at 6:00 PM