In the 1950's Susan Hayward was the queen of the biopics. This is her portrayal of the largely forgotten actress Lillian Roth. Back then there was no People magazine, no E! News, no Oprah. So when Roth published her tell-all autobiography about her quick rise to fame and fortune at a young age, and then the inevitable downward spiral into booze and the poor house, it was a media sensation.  The movie adaption was a lock. Hayward plays to the bleachers here with a performance that pulls no punches. She throws herself into one ugly drunken binge scene after another until, yes, she does end up literally blotto, stumbling into a gutter. Lucky for her there's kindly Eddie Albert as her AA coach to lift her back to sobriety and a noble ending. Jo Van Fleet is on hand as Roth's domineering and scary stage mother as well as a creepy turn by Richard Conte as a wife-beating husband. But it's Hayward's picture all the way, doing a more than admirable job at several big musical numbers showcasing Roth's big pop hits like "Sing You Sinners" and "When the Red, Red Robin Comes Bob Bob Bobbin' Along." 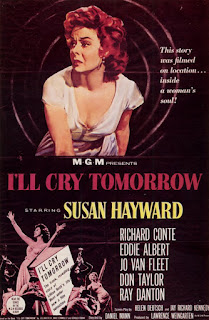 Posted by roncastillonyc@yahoo.com at 5:53 PM