Passion, lies, murder...and classical music. Like Warner Brothers' "Mildred Pierce" with Joan Crawford the year before, this women's picture slash film noir, is a star turn for that other grand dame of the cinema, Bette Davis. She's the protege and former lover of an internationally famous composer played to the hammy hilt by Claude Rains. When the cellist lover she had assumed died in the War (Paul Heinreid) turns stateside and they rekindle their old flame, she decides not to tell him about her svengali ex, he's been through too much turmoil. And that's only deception #1. Davis' titular lies keep piling up like the shoulder pads on her '40s evening gowns. At times chatty and borderline campy, it's worth seeing if only for Davis' New York loft apartment, so ahead of it's time it could be on the cover of ELLE Decor next month. The several concert sequences are first rate, the black and white cinematography lensed by Ernest Haller is lush, and for an extra hoot, check out how they filmed Heinreid playing the cello: not one but two real instrumentalists slip their arms thru his jacket and 'double' for his fiddlin' arms! Sublime kookiness. 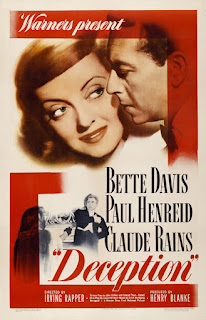 Posted by roncastillonyc@yahoo.com at 8:31 PM