What if you could watch an entirely new episode of "I Love Lucy" that was an hour and a half, in blazing Technicolor, and one that got Lucy and Ricky out of that cramped New York apartment set and out into the wide open spaces of the Rocky Mountains? Look no further, friend. What was surely an effort to cash in on the mega success of their TV show, this glossy MGM fluff piece gave fans more of what they loved from that screwball couple. Here they're newlyweds named Tacy and Nicky (rimshot!) on the cross country maiden voyage of their spanking new life on wheels, a 30 foot trailer home that's way, WAY too big for these neophytes. But this was no slouch production. They got Vincent Minelli to direct, who deftly handles some truly thigh slapping sequences. Yes, Miss Ball does her iconic slapstick and mugging (no one was better), but the surprise is that Desi Arnaz holds his own and has some good bits beyond is exasperated spitting mad Latin husband character. The movie's an innocent snapshot of a post-war America, flush with itself and enamored with it's cars, highways, and disposable income, too innocent to know of the all the turmoil that would show up in decades to come. Just laugh at the antics and funny cameos from scene stealers like Keenan Wynn and Marjorie Main, it's a DesiLu lovefest well worth the time. 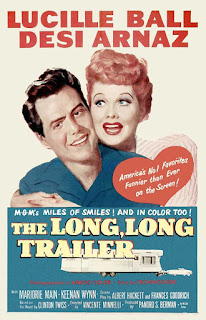 Posted by roncastillonyc@yahoo.com at 3:03 PM