This is one of those great, gritty, police dramas from the 1970's that almost constitute a genre onto themselves.  Hard-bitten actioners like "Dirty Harry", "The French Connection", "Serpico", "Dog Day Afternoon". And while this entry is a grade below those illustrious ground breakers it's definitely worthy of their company. The plot is lean and mean: a group of passionless bad guys attempt to kidnap a New York City subway train in the middle of the afternoon and they'll kill one passenger every minute if they don't get the hostage money (don't laugh at the amount, one million dollars was a lot of money back then). Robert Shaw is the taciturn gang leader. Efficient, cold, and scary, Shaw spits out his dialog like he's being forced to. Things turn into a back-and-forth negotiation with him and the head of the Transit cops, Walter Mathau, giving one of his patented world-weary nonchalant performances that fit him like a glove. The script is filled with some good laughs to ease the high tension, usually delivered by a cross section of cops, transit bureaucrats, and city hall officials all enmeshed in the citywide emergency. Director Joseph Sargent juggles all the action and banter with deft touch, it's probably his best directorial effort. The real unsung heroes here are David Shire turning in a jazzy, jangly score and cinematographer Owen Roizman giving the whole piece the right amount of grimy beauty. The Lindsey era Big Apple looks so menacingly scary no wonder President Ford would famously tell it to drop dead the following year, who wouldn't? 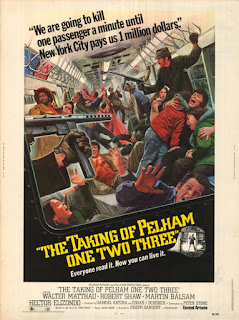 Posted by roncastillonyc@yahoo.com at 2:39 PM