Probably Paul Newman's most iconic performance. He's a freshly incarcerated vandal (for sawing off the tops of parking meters while blotto), who's doing time in a prison work camp somewhere in the rural deep South. He refuses to buckle under to the heartless warden, famously played by Strother Martin --"What we have here is failure to communicate"--and to the other domineering guards. The plot is simply his indefatigable resistance played out in a series of vignettes both comical and painful. He becomes the hero to the other inmates which include a who's who of character actors of the day, including George Kennedy, Dennis Hopper, Ralph Waite, Wayne Rogers, Harry Dean Stanton, and Joe Don Baker. If you're looking for parable, you don't have to look any further than the laid-on-thick allusions to Newman's character as a Christ figure, suffering mightily for his peeps. By the last reel you'll lose count of all the symbolic crosses. But considering the tumultuous backdrop of what was happening societally when the picture was made, it's much more interesting to view the film as a testament to the resiliency of the human spirit in the face of authoritarianism, and given our current political climate isn't that a better reason to watch and  learn? Huge props go to cinematographer Conrad Hall for making a chain gang look so visually stunning scene after scene. And Newman? Try as he might to tamp down his innate star power, he's sexy as hell here. A screen legend. 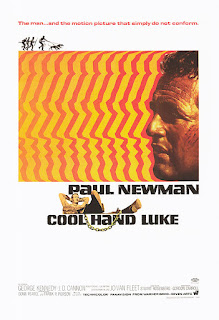 Posted by roncastillonyc@yahoo.com at 4:10 PM