This was the western that started it all, that legitimized the genre as more than just horses, guns, shootouts, and Injuns, that it could be about Bigger Themes. What is the role of the individual vs. society? What's morally right and wrong, and who defines it? And a biggie, What is man's place in this world? Heady stuff. But don't worry, this oater is still chock full of horses, guns, shootouts, and Injuns, and despite it's age holds up extremely well as a piece of pop culture entertainment. On initial release the simple premise was dubbed "Grand Hotel on wheels", a group of disparate travelers are just trying to get from Point A to Point B in a Wells Fargo wagon, but it's their journey of self-discovery that's gives the story resonance. The familiar types, a prostitute being run out of town (Claire Trevor), a gambler (John Carradine), a shady businessman (Berton Churchill ), the alcoholic doctor (Thomas Mitchell), the prim and pregnant army wife (Louis Platt), the milquetoast whiskey salesman (Donald Meek), and the outlaw (John Wayne in a star making performance as The Ringo Kid) are a perfect cast. The human stories are compelling but the picture really delivers on the action. The final chase thru Apache territory is still one of the most thrilling sequences in movie history. The stunts are jaw dropping. And of course, attention must be paid to director John Ford's masterful use of what would become his favorite location, Utah's Monument Valley. All those eerie, majestic rock formations and mesas as a backdrop for the small human drama that unfolds in front of it. 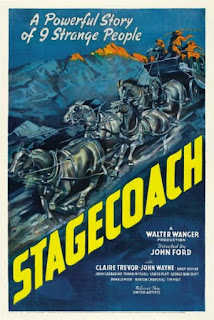 Posted by roncastillonyc@yahoo.com at 12:25 PM