This was to be Marilyn Monroe's penultimate movie, a witty musical rom-com that showed she could bring a modicum of acting ability to a role instead of just being a magnetic on-screen 'presence'. The director here, the old master George Cukor, who had a reputation for skillful direction of female leading ladies, would say afterward, "...she couldn't sustain scenes. She'd do three lines and then forget the rest, she'd do another line and then forget everything again. You had to shoot it piecemeal. But curiously enough, when you strung it all together, it was complete. She never could do the same thing twice, but, as with all the true movie queens, there was an excitement about her." If the performance was created with the magic of editing, it doesn't show, Monroe is smart, touching, and of course, unabashedly sexy. She's a struggling off-off-Broadway actress rehearsing a small topical review in a Greenwich Village theatre-in-the-round. One of the notable celebs the show is poking fun at is a headline making billionaire playboy (Yves Montand). He deigns to travel downtown to see for himself if he should get litigious with this pipsqueak show and he gets mistaken for a neophyte actor auditioning for the piece. He falls for Monroe who doesn't know his real identity. Yes, it's a gimcrack plot device but isn't that the price of entry for most musicals anyway? What makes it work is Monroe's undeniable star quality; when she's in the frame you look at nothing else. Every leading male star at the time turned down this picture because of her infamous behind the scenes shenanigans, so props to Montand for giving a funny, nuanced performance that holds its own against her mega-watt charisma. You really feel his struggle to find a partner who doesn't love him for his bank account alone. There are some nifty musical numbers supplied by Sammy Cahn and Jimmy Van Heusen, mostly for Monroe and her show-within-a-show co-star, Frankie Vaughn, who's like a strapping Tony Bennett clone. And credit goes to Cukor for maintaining the right smart tone for the whole piece, not letting it veer into corny schtick and to coax the goods out of his difficult star. Somehow he got everything he needed to 'string it all together' beautifully. 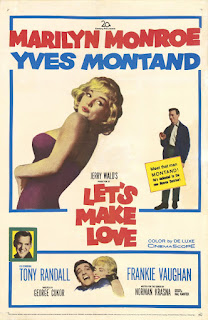 Posted by roncastillonyc@yahoo.com at 11:36 AM