This solid Tracy/Hepburn vehicle is one of their lesser known pairings. Does it reach the stellar heights of "Adam's Rib", "Woman of the Year", or "Pat and Mike"? Not nearly. But some aspects make it worth a looksee. Essentially a quasi-remake of Hitchcock's "Rebecca", we have another naive outsider entering a ridiculously imposing mansion and getting involved with the spouse of a recently deceased person who looms large in everyone's memory. Tracy is an ex-war correspondent who wants an exclusive interview with widow Hepburn. Her husband was a benevolent businessman and national war hero, a mashup of William Hearst and George Patton. But something seems Not. Quite. Right. As Tracy unpeals this mysterious onion you get both stars' undeniable screen presence under the deft direction of George Cukor and cloaked in ace cinematographer Billy Daniels' almost noir-like blacks and whites. If the denouement doesn't really hang together by the last reel, you have to consider the time the picture was filmed. Watch it for the star power and the sumptuous MGM production instead...and the film debut of Percy Kilbride! 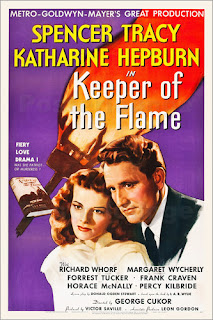 Posted by roncastillonyc@yahoo.com at 5:51 PM