Let's see, Tennessee Williams' first original screenplay. Does he serve up his usual steamy stew of Southern Gothic sexuality, libidinous and repressed in equal measures? Well, for starters there's a 19 year old virgin bride (Carroll Baker) who sleeps in a crib and sucks her thumb like she's longing for, ahem, well let's keep going...she's just three days away from consummating her arranged marriage to a braying lunkhead (Karl Malden) who's so pent up he takes to leering at her through holes in the bedroom wall. Then there's the arch rival to Malden in the cotton gin game (Eli Wallach in a sly film debut). He sets his Big Bad Wolf lothario moves on Baker soon enough, but is he really after her post-pubescent charms or trying to get information on the culprit who burned down his cotton mill? This film detonated like an A-bomb in the middle of the buttoned down 1950's. Banned at the time by numerous cities and the Catholic League, it still has the audacious power to shock and titillate, all told with William's patented blend of hyper emotional dialogue dipped in sorghum soaked drawls. A first rate production design by twins (!) Richard and Paul Sylbert and canny direction by Elia Kazan are the icing on the whole sweet 'n salacious outing. Prepare to clutch your rosary. 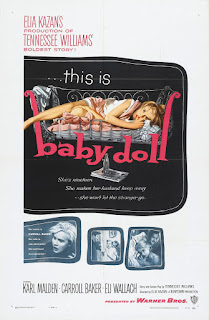 Posted by roncastillonyc@yahoo.com at 2:01 PM